Design for users is an oft cited, well grounded mantra in programming circles. However, us developers often forget about a principle user group: other developers. This post details a typical, frustrating afternoon for a developer dealing with new technologies.

Here’s the situation: I want to update Chromium’s userstyle CSS file with the latest Fanboy element hider rules. As hackers do, my first instinct is to write a script to do it for me. A few lines of Python later, and I’m faced with this:

“Uh?! It must be that damn corporate firewall again.” Now, I’ve seen this one before and, armed with another script (to set up cmd with the correct proxy settings… yes, I’m running Windows here), I try again… with no joy:

“I’ll fix it later”, I think as I copy/paste the file manually.

“Hmm, I wonder if anyone’s thought of minifying userstyles?” With Fanboy’s CSS file, being ~4500 lines, it can’t be a bad idea. Having not used yuicompressor for a year or so now, I thought I’d take a look to see where the development has come since then. 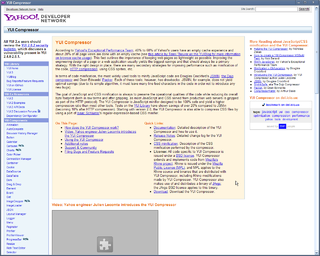 “OK, well, where’s the download link”. That’s a screenshot in a Chromium app window and still there’s another 2/3’rds to go. Scanning amongst the wall of text, I finally notice the unassuming download link:

The first result of a Google for yui InvocationTargetException returns a bug report, with a comment mentioning a fix(?) was committed in 2010. “OK, fine. It’s impossible to not notice the ‘Fork me on GitHub’ banner, so there must be a newer build there.”

“Damn, there are no pre-packaged builds. Nevermind, I’ll try building myself.” Noticing the build.xml file, I head over to download Apache Ant. While, I’ve never used ant before (I more versed with make), I know it’s a mature project, so things should go smoothly, right?

A quick Google for apache ant gives me those handy links to directly jump to pages. “Hmm, what are those called again?”; google sitelinks. “Great! relevant-looking results”.

“This Help Centre is not currently available in your language.” “Argh!!” Just because I live in China, doesn’t mean I can speak Chinese. Where’s an English fall-back option? Oh, forget it.

Anyway, those links are called “mini sitelinks”. Back to the apache ant search… I want to download it, and oh, great, there’s the download link straight away.

Zzz. About a minute later and nothing happend. “Resolving dependencies… Oh, it’s trying to download something.” Firing up the aforementioned “cmd proxy setter” script, but no, still nothing.

Something’s up here. I’ll rollback. Arbitrarily, I tried a DDG search instead.

Nice, an “official site” badge. I wonder how they determine that. Hmm, this is looking different… 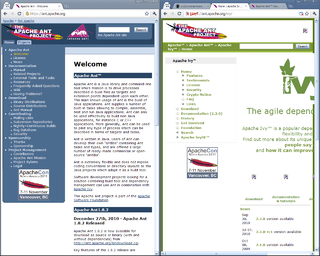 Damn it! If this is ant, what did I just download? Pft, nevermind. Proceed to the download link.

Good, nice and easy. Moving on…

Huh?! “Build failed”? I just wanted to see if it’ll run okay. And what’s this Java error? You didn’t mention anything about Java.

Hmm, seems like an option to specify the build.xml location (though, isn’t that what [target] is?). Anyway, let’s try that:

BUILD FAILED. Ah, now you tell me that I explicitly need JDK.

Despite my efforts (oh yes, yes, I tried), there’s no getting round this one.

Things don’t have be this hard! Design for users, yes, but don’t neglect fellow developers. Writing an API? Always prefer simple, well defined interfaces. Laboriously writing documentation for the sake of busywork? Stop. Rethink your design. It can always be simpler.

Developers are users too.